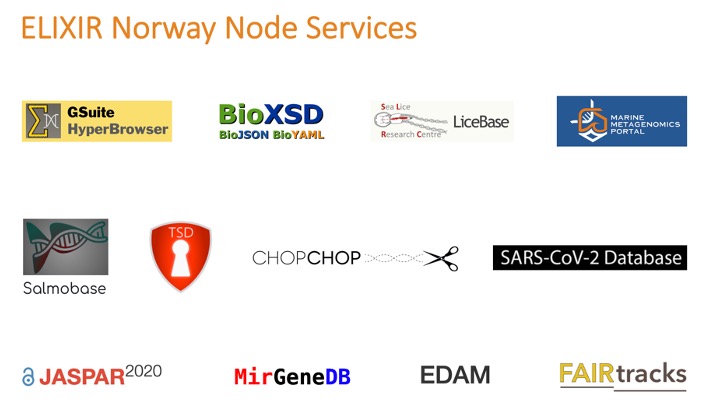 ELIXIR Norway is happy to announce the launch of eight new ELIXIR Node services to be included in our Service Delivery Plan towards ELIXIR Europe.

Our new Node services have been assessed and approved by an international committee for factors such as scientific focus and quality, quality of service, maturity, sustainability and impact. We are therefore proud to include the Norwegian services presented below in the service registry of ELIXIR Europe, along with the Marine Metagenomic Portal, BioXSD, LiceBase and the Genomic Hyperbrowser. As announced earlier this year, all of these services are also included in the Norwegian bioinformatics service registry, and may be found through our service page.

CHOPCHOP, a web tool for identifying CRISPR–Cas single guide RNA (sgRNA) targets, developed by the group of Eivind Valen at the Computational Biology Unit at the University of Bergen

EDAM, an ontology primarily dedicated to categorising computational tools and data resources, provided by Matus Kalas and Inge Jonassen at the Computational Biology Unit at the University of Bergen, in tight collaboration with Herve Menager and Jaques van Helden at ELIXIR France.

FAIRtracks, an ecosystem for gathering, curating, validating, integrating, and indexing the metadata of genomic track datasets, developed by Sveinung Gundersen, Eivind Hovig and others at the Center for Bioinformatics at the University of Oslo together with ELIXIR Spain and EMBL-EBI. FAIRtracks was appointed as an ELIXIR recommended interoperability service earlier this year.

JASPAR, an open access database of manually curated, non-redundant transcription factor (TF) binding profiles, developed by the group of Anthony Mathelier at the Norwegian Centre for Molecular Medicine at the University of Oslo.

MirGeneDB, a manually curated database of animal small non-coding RNAs, developed by Bastian Fromm, Eivind Hovig and others at the Center for Bioinformatics at the University of Oslo.

SalmoBase, a comprehensive data resource for salmonids species based on different omics data, developed by the group of Dag Inge Våge at the Norwegian University of Life Sciences

SARS-CoV-2 DB, a database with high-quality curated and freely accessible SARS-CoV-2 genomics- and contextual resources, developed by the group of Nils Peder Willassen at the University of Tromsø.

TSD, the Norwegian services for sensitive data, is a platform enabling collection, storage and analysis of sensitive research data in a secure environment. TSD is provided by the University of Oslo Centre for Information Technology (USIT), and has a long-standing collaboration with ELIXIR Norway and serves as a foundation when it comes to managing sensitive data.